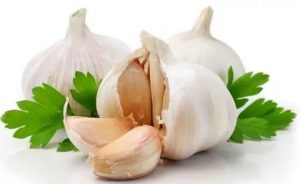 Garlic and The Singer’s Remedy –

Conrad LeBeau
The following formula was told to me recently by Jeff, a Milwaukee resident, who sets up music and entertainment equipment for events in the Milwaukee area. He called it the Singer’s Remedy for a hoarse throat. He said it works every time.

The formula is to take 6 cloves (toes) of raw garlic that are peeled and place them in a pot with about 2 or 3 cups of water. Bring it to a boil and cover the pot – reduce heat and simmer for about 20 to 30 minutes. Remove from heat.

When done, let stand for 10 to 15 minutes to cool to a tolerable temperature for the skin. Then, place a large handkerchief or white cotton cloth into the water to soak up the garlic essence. Place the cloth around the throat of the person who has a tickle or hoarse throat and hold there for about 15 minutes. As the warm garlic water is absorbed into the skin around the throat, the hoarseness or mild throat infection vanishes and then as they say in Hollywood- “the show goes on.” I am told this recipe also works for sore throat. You might also want to gargle with the garlic water as well.

A variation is to place several cloves of raw garlic (cut up in pieces) in a small jar of apple cider vinegar. Shake and let stand for at least one hour. Take one tablespoon and add it to 4 to 6 ounces of warm water and gargle. You can also drink this mixture.

Greg, a local Milwaukee resident told recently that his mother had suffered form rheumatoid arthritis for 20 years. One day she began taking one small St Joseph’s aspirin (81 mg each). Three months went by and one day she woke up and her arthritis was gone. It has not returned. What a simple remedy. A search at Pubmed for “aspirin” retrieved 72169 articles, indicating how important aspirin is. Salicylic acid is the active component of aspirin. Salicylicate(s) are found in nature in willow bark, white birch bark and other plant sources.

Aspirins side effects may be reduced by taking it with meals instead of an empty stomach, to reduce the concentration of the salicylic acid. Another way to reduce side effects is to pre-dissolve aspirin completely in water before swallowing it.

Aspirin has many other uses

[Cayenne as an alternative to aspirin. A teaspoon of cayenne pepper (about 3 cayenne capsules) taken in water will also do the same thing. Cayenne will also dissolve the blot clot that caused a stroke. Cayenne is most effective if it is used when the stroke occurs or within 24 hours. The longer one waits to use it after a stroke – the less effective it will be.]

A letter to Dr Pierone published at the body.com in 2004 stated:

I’ve read that “…a clinical trial conducted in Zimbabwe in 2001 showed that aspirin monotherapy (1.2gr.) increased CD4 count an average of 83, and that was at the nine month point. At the 12 month point, CD4 counts were still approximately 35 above baseline (compared with AZT at 35 below baseline). Overall, moderate-dose aspirin monotherapy increased CD4 counts more than twice as much as high-dose AZT therapy, and maintained CD4 counts above baseline for about three times as long as AZT could.”

The full letter can be read at –http://www.thebody.com/Forums/AIDS/Meds/Q155616.html

Until next year, I wish each of you a Merry Christmas, Happy Holidays, and a Blessed New Year. Conrad LeBeau – Keep Hope Alive